Dr. Harrison’s presentation will deal with the four ways in which art makes use of, or addresses, the incompletion of its representations.  The first—illustrated by an ostensibly complete work like Michelangelo’s David—incorporates “off-screen space” within its subject matter (in this case the giant Goliath, not represented by Michelangelo’s statue). 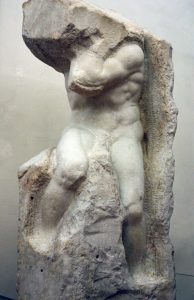 The second thematizes incompletion, as Michelangelo himself does in the literally unfinished sculptures of his Slaves or Captives for the Medici tombs.  Auguste Rodin takes this procedure to a more elaborated level.  The third art of incompletion does not merely thematize the artwork’s failure to achieve completion, but figures it in a number of complex ways, exploring the problem of absent wholes, of linguistic failures and aporias, and is appropriately exemplified by the figurative arts of the early twentieth century and theorized by a series of 20th-century philosophers such as Ludwig Wittgenstein, T. W. Adorno, Heidegger, and deconstructionists generally.  The fourth art of incompletion reflects on this incompletion centrally within its work, in a self-conscious and occasionally postmodernist articulation of explicitly impossible-to-finish works, or works that no longer aspire to completion, but rather interest themselves with the provenance and destination of art (its uncontrollable reception).
Exemplifications of these four “moments” of aesthetic completion range from the sculptural arts of Donatello and Verrocchio to the writings of the novelists Robert Musil and C.E. Gadda (alongside the poets Ungaretti and Montale), to the photographs of Luigi Ghirri and the films of Michelangelo Antonioni and Ferzan Ozpetek.  The fourth stage of incompletion is exemplified (in PowerPoint, as throughout) by the recent fiction of Anna Maria Ortese. The ideal audience for this lecture would include students and instructors of art history, aesthetics, Italian culture and literature, philosophy, comparative and literary theory.